Peaches are round to oblong with a slight tip. Because of the hard seed, or “stone,” at their core, they are known as a “stone fruit,” or drupe. The fuzzy skin of peaches is the only characteristic that distinguishes them in appearance from the smooth-skinned nectarine. Ripe peaches can assume a range of colors from creamy-white to light-pink, yellow, orange, and
red. The flesh also can range from a pinkish white to an intense yellow-gold. The firmness and juiciness of a peach depend largely on variety and on the
degree of ripeness.

Peaches are generally classified into one of two categories: “freestone” or “clingstone,” although some are also considered “semi-freestone.” Freestone peaches, the ones more commonly available, are those whose pits are easily removed, whereas the pit of clingstones is enmeshed within the flesh. Both freestone and clingstone peaches have numerous varieties that differ in skin color, flesh color, firmness, and juiciness. Two of the most popular
varieties of yellow-fleshed freestone peaches are Elegant Lady and O-Henry.
Other varieties include the Hale, Rio Oso Gem, and Elberta.

A native of China, where they have been grown for more than 2,500 years, peaches were once revered as a symbol of longevity and immortality. The fruit made its way to Europe by way of Persia. Spanish explorers brought the plant to the New World, where Spanish missionaries planted the trees in California. Since the early 1800s, peaches have been grown commercially in the United States, which now produces one-fourth of the world’s market crop. Other major producers of peaches include Italy, Greece, and China. Georgia was once the largest producer of peaches in the United States, earning it the nickname “Peach State.” Today, the fruit is grown in more than 30 states, and California is the largest producer. Peaches are related to other deciduous flowering fruit trees, including plum, cherry, apricot, and almond. Although originally grown only in moderate climates, the many new varieties make it possible for peaches to be grown throughout
much of the United States. Standard trees may grow as high as 30
feet and can live up to 40 years. Some dwarf varieties may reach no more than 3 feet. Beautiful flowers, ranging from pale pink to red, appear in the spring and give way to fruits that usually ripen in midsummer.
An 8- to 10-year-old tree can produce up to 6 bushels of fruit annually.

Peaches that are slightly soft to firm when pressed and are free of blemishes or soft spots should be chosen. To hasten the ripening process, underripe peaches can be left in a loosely closed paper bag at room temperature for 2 to 3 days. Once ripe, they can be kept at room temperature for about 3 to 4 days or slightly longer in the refrigerator. For cooking purposes, the skin of a peach can be easily peeled by blanching for 30 seconds.

A lot of useful article are available on our website "4thofJuly2020.com". Keep Visiting for new useful articles.
TagsBenefit of Peach Peach Use of Peach 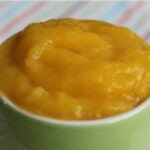 Food and Recipes • Food for Babies

A taste of tropics for your baby!.Sweet, juicy mangoes are rich in Vitamin A and Vitamin C. Soft, ripe mangoes don’t need to be cooked, but if you are...

Peppers are thick-fleshed fruits with a smooth, waxy skin and a crunchy texture. They can be small and round, large and oblong, or almost any shape and size in...

Breadfruit is a large oblong or round fruit, 8 to 10 inches in diameter and up to 10 pounds in weight, with a thin, bumpy skin that turns green-brown to yellow...